Over the weekend, Middlesbrough manager Neil Warnock admitted that there was a ‘problem’ in the club’s efforts to sign Sporting striker Andraz Sporar.

Even though the coach had said on Friday that the player was about to have a medical ahead of the transfer, there’s been an unknown issue blocking the move.

Well, the Portuguese press comes up with more information about it today, and they’re still confident that the deal is going through, even though each outlet has a different slant.

So let’s start with A Bola. Their short story claims the player has indeed gone through the physical exams, and the ‘impasse’ in the deal is because of issues between Sporar and Sporting. They say they’ve been told the problems can be solved and there should be a green light for the move in the coming days. 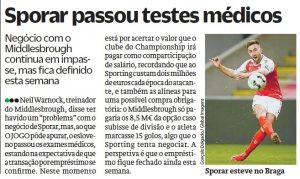 O Jogo is another one claiming Sporar has passed the medical. The player is now said to be negotiating what Middlesbrough will pay him, and the clauses which will make the transfer permanent.

Meanwhile, Record claims there’s a ‘tax issue’ delaying the deal. Still, that should be fixed in the coming hours and the clubs will soon be able to complete the transfer.

So even though each outlet points out a different issue, it’s clear that the Portuguese sources are very calm about it.

Sporar is set to join Middlesbrough on a one-year loan, and the move would be made permanent if the club are promoted and the striker scores 15 goals. Then Boro will pay €8.5m for the signing.