Real Madrid face Barcelona on Sunday and the Champions League winners director, Emilio Butragueno has insisted that Julen Lopetegui will be in charge of the club for El Clasico.

Mundo Deportivo claims a victory at Camp Nou this weekend will provide the Basque coach an ‘extra life’, while a defeat could also possibly end his short tenure with Los Blancos.

Should he be sacked, the newspaper looks at the candidates to replace the former Spain manager and this is when they explain why Manchester United manager Jose Mourinho will not be currently considered for the job.

The Portuguese tactician, who already managed Real between 2010 and 2013, has a contract with the Red Devils and his salary demands are also way higher than what the La Liga giants have planned for a new manager.

It’s claimed that these are the real ‘obstacles’ for Real to reappoint the 55-year-old, but an approach for him in the next summer is still not ruled out yet.

Sport Witness revealed on Tuesday that Mourinho has not held talks with his former club, despite reports in Spain saying otherwise. 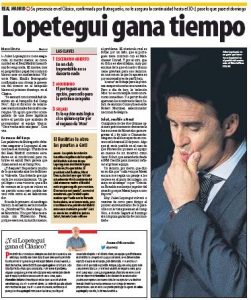 Meanwhile, Mundo reports Castilla coach Santiago Solari, Antonio Conte and Belgium manager Roberto Martinez are the other candidates for the managerial position at Real Madrid, if Lopetegui is shown the exit door.