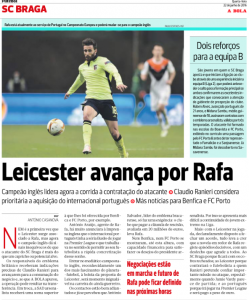 First Manchester United, then Liverpool and now Leicester City. The Foxes are one more club who are said to be close to activating Rafa Silva’s release clause, as the player keeps seeking a move to the Premier League.

According to an article in Wednesday’s edition of Portuguese newspaper A Bola, Claudio Ranieri has asked the club board to advance with the negotiations and seal the deal soon.

Braga’s president Antônio Salvador will reportedly only sell the player for his release clause, which is €20m (£15m). Despite the alleged interest from Benfica and FC Porto, none of the Portuguese clubs have got close to that amount so far, always wanting to get themselves a bargain.

Earlier this year, Rafa’s agent Antonio Araújo told Sport Witness that the player’s desire was to play in the Premier League and they were working towards this objective. This quote given to us is also mentioned by A Bola in their article on Wednesday and it looks like Araújo may have found a destination for his client.

Rafa is currently with Portugal’s squad at the Euros. He hasn’t been a starter, but from the few minutes he’s had so far, many fans think he should have a place in the team.