On Wednesday, Bild reported Manchester United and Borussia Dortmund are ‘about to close’ the deal for Jadon Sancho.

Since then, multiple sources from England have backed up Bild’s claim of the Red Devils submitting a second offer worth €85m for the winger.

Kicker in Germany now provide their own take on the ongoing negotiations and they state there was no breakthrough in the talks between United and the Bundesliga, until midweek.

With this breakthrough, there’s belief the deal for the England international will ‘most likely’ go through this summer, and even happen ‘possibly soon’.

BVB are expected to be without the 21-year-old next season as his move to join Ole Gunnar Solskjaer’s is getting closer. From their end, Dortmund have already started searching for the wideman’s successor. 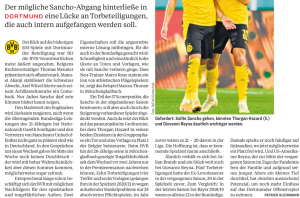 Kicker’s report mainly echoes what’s been said in Germany and England in the past 24 hours, and them joining the rest further indicates that the long saga associated with Sancho and Manchester United could come to an end, ‘possibly soon’.