Benfica’s clash against Arsenal in the Europa League is the main subject in Portugal’s sports newspapers today. The 1-1 draw in Rome is seen as a positive result for the Lisbon side to try to get the qualification in the second leg.

Local outlets reckon that by using three defenders, Jorge Jesus’ main plan was to hold the Gunners’ attack, abdicating a little of trying big things in this game and leaving the daring for later.

Now what really caught our attention was how Portuguese newspapers rated Pierre Emerick Aubameyang for last night’s performance, as it seems to be a consensus that he didn’t do well.

A Bola gives the striker a three out of ten, making him the worst among all Arsenal players who took part in the game.

‘Caught four times offside in the first half. He had two occasions that could have ended the tie. He shot to the side, alone, at 19 minutes, lost in dribbling at 75,’ they write. 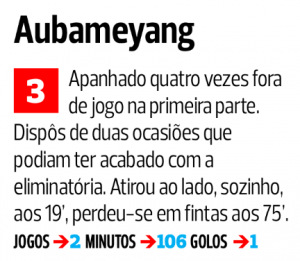 His poor ratings continue with other newspapers. O Jogo gives Aubameyang a four out of ten, also making him the poorest in the Gunners’ squad, and says: ‘Unlike the last game in England, where he scored three goals against Leeds, Aubameyang was spendthrift last night, namely at 9 minutes, 63 and 75, when he had good chances to score. He also sinned for the offside plays where he let himself be caught”.

Meanwhile, newspaper Record takes it a little easier on him. They give him a two out of five, making him better than Kieran Tierney, Gabriel Martinelli, Nicolas Pepe, Willian and Mohamed Elneny, as they were all given a one. Still, the striker still gets some criticism.

‘The company’s star, Aubameyang, was not short of opportunities, as happened at 19, 63 (shot to the side) and 75 (disarmed by Lucas). In addition, he collected offsides (4).’

Despite the disappointment with Aubameyang, Portuguese outlets praised the performances of Bukayo Saka, who scored Arsenal’s goal, and Martin Odegaard.