Following the rumours which have been linking William Carvalho to Premier League clubs, the Portuguese press finally has a say on the story today.

Newspaper Record is the one bringing their own take, saying the 28-year-old could follow the same path as his former Sporting midfield partners Eric Dier, João Mário, Adrien Silva and Bruno Fernandes.

The outlet lists a few clubs who could land Carvalho in the next transfer window, and they give some special attention to Tottenham Hotspur.

It’s claimed the London side has an advantage because of José Mourinho’s ‘persuasiveness’. It’s said Spurs have an ‘interesting protect’, as the Special One ‘rarely finishes a season without a trophy’. 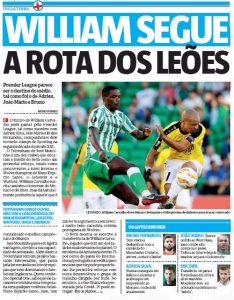 Leicester City and Wolverhampton Wanderers also get a mention in the story, with Wolves said to have the advantage of counting on many Portuguese players in the squad.

Record adds that Betis would be fine selling Carvalho in the next transfer window, especially because he’s one of the players who they could make the most money with. But it’s not said how much the Spanish side would demand for the midfielder.