Portuguese outlet O Jogo has today some updates on the situation of Porto fullback Tomas Esteves, who’s been having a loan spell at Reading this season.

They claim that from the many players who have been out of the Dragons on temporary moves, he’s the only one who’s having the chance to prove himself to the club during the pre-season.

When speaking about Reading, O Jogo reckons that the 19-year-old had a positive spell at the Championship side, but they don’t even consider the chance of a permanent move to the Royals.

The newspaper writes that the loan move was made for Tavares to play regularly, in a more competitive league than in the Portuguese second division, and ‘that was reached’. 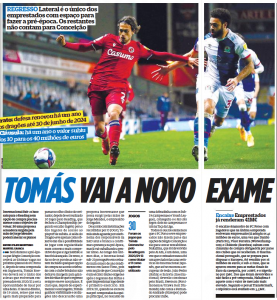 Record writes that the fact Porto didn’t include a buying option for Reading was done on purpose, since his return to the Dragons had always been in sight.

Following his good time in England, where he made 30 appearances, it’s said Esteves gained some ‘visibility’ and Porto will not rule out a sale in case there’s an ‘interesting offer’.

Reading, however, don’t seem to be included in that race, as the newspaper simply ignores the chances of a permanent move to the Madejski Stadium.