The Portuguese media always keep an eye on their players and managers who are working abroad. Especially when they’re doing well, which means there’ll be a report on everything possible.

That’s the case with Marco Silva right now. With four wins in eight games, the Hull City boss has been impressing with his immediate impact after taking charge of the club.

Portuguese newspaper O Jogo have taken bits from an article written in the Hull Daily Mail to say how the British press were wrong in doubting Silva’s capacity as a manager. ‘Marco makes critics swallow frogs’, says the headline.

Beside using quotes from the English newspaper, they endorse their opinion claiming his success has already ‘shut up’ those who had second thoughts about Marco Silva’s ability to suceed in the Premier League. 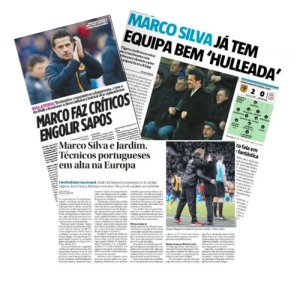 Diário de Notícias has an article with less provocation, but still happy for the success. They say how Marco Silva and Leonardo Jardim are both living great form in Europe, remembering the Portuguese managers’ reputation is still high outside of their homeland.

Especially on Marco Silva, the outlet claims that “in a country used to applaud the achievements of another Portuguese manager, José Mourinho, it only took a month before Marco Silva began to win a troop of admirers.”

Record highlights the fact that after facing sides such as Manchester United and Liverpool, Hull will now play Arsenal and close what is theoretically the most difficult cycle. Then the stay in the Premier League is ‘right there’ with the manager sorting out the team to play as he wants.