Fábio Silva hasn’t even made his official debut for Porto yet, but we already know he’s one of the candidates to become a Liga NOS stars in the next few years.

The 17-year-old managed to score Porto’s winner in the 2-1 victory over Getafe at the weekend, giving the club the Iberic Cup trophy.

His rise to the first team is reported by newspaper O Jogo today, who also reveals that he’s rejected offers to join Barcelona and Manchester City.

O Jogo claims that a year ago, both Barça and City were ready to pay the youngster’s €10m release clause. 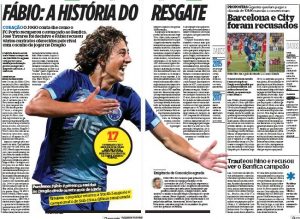 But be denied both offers. First because he wanted to become a ‘reference’ at Porto, and also because both Barcelona and Manchester City were only offering him a place in their U17 squads.

Fabio Silva is now protected by a €25m release clause, but O Jogo says Porto already need to worry about that.

Will Barcelona and Manchester City come back for him? Time will tell.