Friday’s edition of Mundo Deportivo explains the striker has ‘aroused the interest of West Ham United’, but his intention is to continue at the Camp Nou.

The La Liga side have bolstered their attack by adding Sergio Agüero and Memphis Depay to their squad for next season.

The duo’s arrival will make it difficult for the Dane to enjoy regular minutes at Barca, but he wants to fight for a place, especially now that Ousmane Dembélé is set for another spell on the sidelines.

However, the Denmark international and the Catalan club ‘could collide head-on’.

Barca’s finances have been impacted due to the global pandemic, which has left them 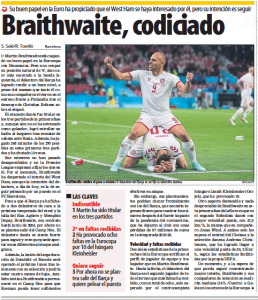 with €97m losses for 2019/20 season, and Ronald Koeman’s side want to make money through the Dane’s sale in order to help balance the books.

David Moyes’ side have their eyes set on Braithwaite and Mundo add his ‘good role’ at Euro 2020 has led West Ham to be interested in him.

A deal could be concluded if both Barca and the Hammers can convince the former Middlesbrough man for a transfer.