Portuguese newspaper Record has a story today about the contract renewal of striker Carlos Vinícius.

The player is said to be close to signing a new deal, and should be protected with a release clause of €120m.

The outlet says the reason for that is the recent news about interest from other clubs, such as Liverpool.

Record doesn’t have a lot to write about the Reds’ chase for the Brazilian, since all they do it so take claims from AS which said the Anfield Road side had been watching him. 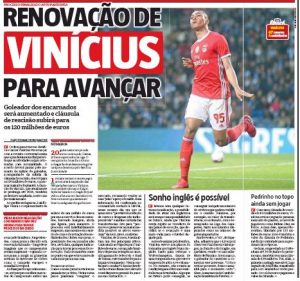 But there’s another Premier League side who are named in this story, and that’s Wolverhampton Wanderers.

Record writes a little about Vinícius’ ‘English dream’, and says he should still have the opportunity of moving to the Premier League.

They recall that Wolves tried to sign the player before he moved to Benfica, but the transfer collapsed due to the lack of a work permit.

Now it’s claimed that the visa could become possible in the future, be it for his higher wages, more expensive transfer fee or even his performances with the Eagles in the Champions League.

That’s something that could help either Liverpool or Wolves to get him.