The more Steve Mandanda to Marseille is considered a sure thing, the more pressure it puts on Marseille to make it so. An absolute hero during his time with the club, Mandanda was a Marseille icon with few contemporary comparisons.

The goalkeeper’s move to Crystal Palace clearly hasn’t worked out and, despite Mandanda being of a higher level than Wayne Hennessey, he hasn’t been able to show his class. Sam Allardyce hasn’t seemed particularly keen on a Mandanda future, which could be partly motivated by continued reports of a Marseille return.

L’Equipe have a big transfer special in their Tuesday edition, a lot of which focuses on Marseille. It’s stated that Mandanda will ‘surely’ be part of the recruitment.

The French club’s sporting director Andoni Zubizarreta (pictured above) is the man tasked with getting a deal done, and Crystal Palace won’t simply roll over. 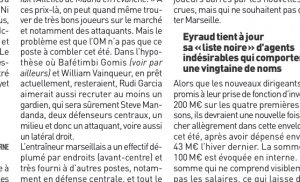 unday’s edition of L’Equipe claimed Crystal Palace are asking for €5m, which was described as ‘greedy’.

But such a fee isn’t so bad for a 32 year old goalkeeper who was Ligue 1’s best during his final season with Marseille.