Two days ago, we covered a report from Sport, who explained that Ajax will have no problem in agreeing a deal with Barcelona for Matthijs De Ligt.

On Thursday, the same newspaper reported the La Liga winners have put ‘all efforts’ into signing the centre-back, while they face competition from Bayern Munich.

Friday’s edition of another Catalan newspaper, Mundo Deportivo, claims the 19-year-old has Barcelona as his ideal destination and his dream could soon be a reality in the summer.

The Netherlands international wants the deal to be negotiated in the right manner, meaning the two clubs must agree a deal before he’ll negotiate personal terms.

In January, the Blaugrana agreed a deal with the Dutch club for Frenkie de Jong worth €75m plus €11m variables.

The midfielder was wanted by other clubs, but Ajax decided against having a bidding war and Barca hope to repeat the same with De Ligt, both in terms of fee and terms. 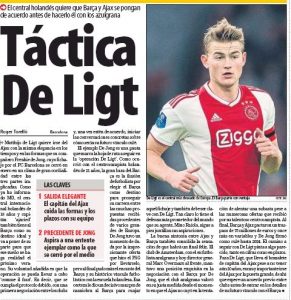 Barcelona and Ajax share a very good relationship and with the latter not wanting to subject De Ligt to a bidding war, finding an agreement between the two clubs should not be an issue.