On March 27th, we covered claims from Sport, who explained that Matthijs De Ligt is ‘closer’ to joining Barcelona and Ajax have ‘no problem’ finding an agreement with the Blaugrana.

Thursday’s edition of the same newspaper now claims the ‘all efforts’ at Barcelona are focused on finalising the 19-year-old’s transfer, who is their ‘absolute priority’ for next season.

The negotiations are on the right track, but so far nothing has been signed yet and there could be last minute surprises to topple the Spanish champions’ effort to sign the centre-back.

Ajax officials met their Barcelona counterparts at the general assembly of the European Clubs Association in Amsterdam earlier this week and during an informal contact, Ernesto Valverde’s side had an opportunity to seal the deal for the teenager.

The Catalan club have a specific economic parameter beyond which they will not make an effort to land the Netherlands international.

In the last hours, Bayern Munich have submitted a ‘huge offer’ to the Eredivisie club and the player to convince him to join them as the German club are planning to ‘go with everything’ in their efforts in landing him. 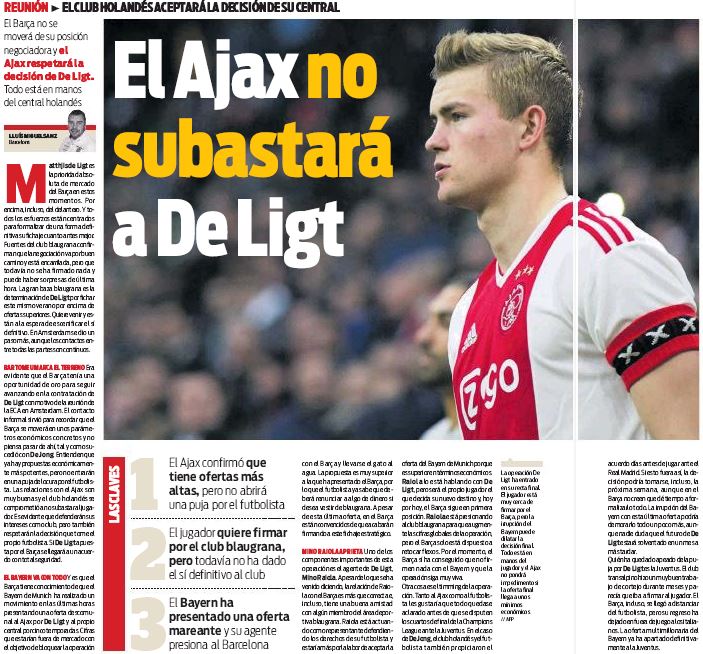 The proposal submitted by the Bundesliga winners is higher than what the Spanish champions are willing to pay.

De Ligt’s agent Mino Raiola could be another factor in deciding his client’s next destination, but Sport claims the Ajax star will make a decision on his future and at the moment, Barcelona still remains his first choice.

Ajax have made it clear that they will not be conducting a bidding war for their prized asset as everything is in the hands of the youngster.

The Dutchman and his employer want to seal the deal before the Champions League quarter-final tie against Juventus.

There is a possibility a decision could be made next week, but Bayern’s latest approach may delay it further.

Sport remains confident that De Ligt’s future will be resolved before the end of April.