During the last transfer window, there were repeat claims in France about Arsenal’s interest in Houssem Aouar.

The Gunners tried to reduce the Lyon star’s price tag by including Mattéo Guendouzi, but the Ligue 1 side weren’t interested in this deal.

According to claims at the end of the window, Edu wanted Thomas Partey, while Mikel Arteta was keen on having the France international. Earlier reports stated the north London club ended up going ahead with their technical director’s choice, dismissing their manager’s transfer desire in the process.

Aouar, who had nine goals and 10 assists in all competitions last season, has failed to continue his form so far this campaign.

He was left on the bench during his side’s last league win over Angers, and after the match, the player refused to join his teammates for the post-match warm down.

According to L’Equipe, the attacking midfielder blamed the poor pitch conditions for not taking part in the warm down session.

This didn’t go down well with Lyon, and their chiefs, Vincent Ponsot and Juninho, with the consent of Jean-Michel Aulas decided to punish Aouar. He will therefore miss the next tie against Reims this weekend.

At the end of the report, the newspaper mentions Aouar will have deal with the frustration of not receiving a ‘firm offer’ in the summer.

He dreamed of joining a big European team, but Arsenal, ‘too timid in their approach’, weren’t willing to meet the €50m fee demanded by Lyon. 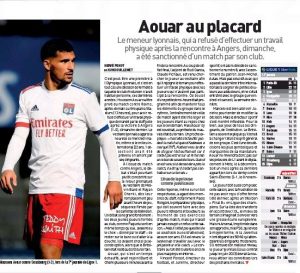 L’Equipe end their report by stating Aouar can once again ‘stir up’ suitors, if he manages to regain his best form.

Last week, reports stated the Lyon star is Arteta’s first choice target for attacking midfield, and it remains to be seen whether Arsenal can convince Lyon to sanction his sale.