On September 21st, Mundo Deportivo reported Nélson Semedo did not train on Monday as the Barcelona right-back’s move to Wolverhampton Wanderers is getting closer.

Luis Suárez is also expected to leave the Camp Nou, but the Uruguayan striker trained, and has continued to do so on Tuesday, according to Sport.

The report adds the Portugal international has been the ‘most notable absence’ from today’s training session as he’s ‘waiting for his signing’ with Wolves ‘to close’.

Ronald Koeman’s side are working on several exit operations so that they can raise funds and lower their wage bill.

Ivan Rakitić’s move to Sevilla, and the potential exits of Suárez and Arturo Vidal will lower the Catalan club’s wage bill. Semedo’s sale to the Wanderers still remains ‘key’ for them to raise funds.

Another report from today’s edition of Sport explains if Wolves end up paying €35m for the defender, then Barca will have ‘room for manoeuvre to deal with the most urgent operations’, which includes signing Ajax’s Sergiño Dest and Manchester City’s Eric García. 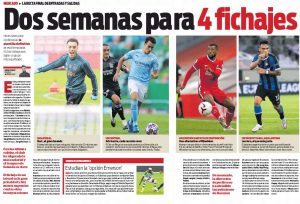 Liverpool midfielder Georginio Wijnaldum and Inter Milan star Lautaro Martínez are also included in the list of possible targets who could arrive at Camp Nou before the window closes.

Mundo Deportivo latest report claims, Barca and Wolves are in the ‘final phase’ of reaching an agreement for the fullback’s transfer. The deal would be closed for a fixed fee of €32-35m, and the overall cost could reach around €40m including variables.

As per the report, only ‘fringes’ of the deal between the two clubs are missing, and once that’s sorted, Semedo will sign a five-year deal with Wolves.