Let’s start with newspaper A Bola, who are taking things easy for now. They say the Saints have only made an initial approach to know the conditions of a deal.

The Premier League side were told that Sporting want €35m for the transfer, and that price could be brought down in case the Lions keep a percentage over the player. That’s all that happened in the first meeting.

Now Southampton may put those numbers on the table the next time they sit to talk, and the Lisbon side ‘won’t make the negotiations easy’.

It’s claimed that both Fulham and West Ham had made offers for Jovane, both close to €20m, and were turned down by Sporting. 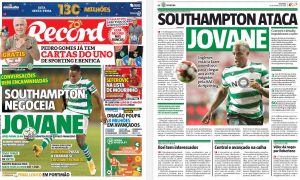 The version that Southampton fans should like more is coming from Record. That’s because they say Sporting are demanding only €20m for the move, and that makes it sound like it’s closer to happening.

Record says the negotiations are ‘well forwarded’ and the ‘parties involved believe’ there could be a deal. They say the Saints are ‘making an effort’ to get to €20m.

They also claim that West Ham, Fulham and Hertha Berlin were all interested in the player, but backed off when they heard Sporting wanted €20m.

So today, this is really a matter of choosing which newspaper you want to believe in.