Barcelona’s failure to sign Manchester City’s Eric García is the last two windows has been well documented by the Spanish press.

The defender’s contract with the Citizens expires on June 30th and the La Liga side are believed to be the clear favourites to acquire his services on a free transfer.

Mundo Deportivo now claim the 20-year-old is ‘very close’ to reaching an agreement with Ronald Koeman’s side.

This will also allow the centre-back to fulfil his wish of a return to the Catalan club, four years after leaving them for City.

García had agreed a deal with the Camp Nou side’s previous board and this had better financial terms than the proposal tabled by the current management led by president Joan Laporta.

The newspaper states the economic differences have now been resolved, which is why the two parties are close to agreeing a transfer.

As per Mundo, the Spain international will be Barcelona’s first summer signing and 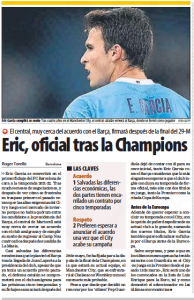 his transfer is likely to be made official after City’s Champions League final against Chelsea on May 29th.

García is close to winning the title with Pep Guardiola’s side and can finish the season on a high, if City beat Chelsea in the European final later this month.

Despite not featuring regularly for City, the player is likely to be included in the Spain squad for the Euro 2020.

García wants his move to Barcelona be made official before the start of the UEFA tournament in June.