Dani Ceballos was one of the key players in Spain’s Euro U21 triumph this summer and ever since the conclusion of the UEFA tournament, the Real Madrid midfielder has been heavily linked with a loan move to Arsenal or Tottenham Hotspur.

Los Blancos are not worried where the midfielder will end up and have asked him to pick between the two north London clubs.

Tuesday’s edition of AS claims Arsenal will win the race, unless something dramatic changes things, and the signing will be official ‘in the next few hours’.

The Spaniard is scheduled to travel to London to undergo a medical examination with Unai Emery’s side.

The agreement for a loan deal between the Emirates club and the 13-time European champions was ‘practically done’ on Monday, which is what Ceballos had asked for, since he still believes he will have a future at Real Madrid.

AS explains Emery has been the key in helping Arsenal sign his compatriot because the manager spoke to Ceballos and his family and convinced them on the transfer. 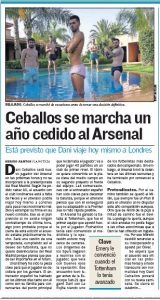 The former Sevilla boss wants to make the player a key member of his side next season.

Having beaten competition from Spurs, the report further explains that if everything goes as per the plan, Ceballos is expected to ‘pose’ with the Arsenal shirt today.

This all fits perfectly with AS’ claims of a week ago.