On July 17th, AS reported Real Madrid’s Dani Ceballos is ‘one step away’ from joining Arsenal on a loan deal.

Later that day, Marca explained the ‘talks are advanced’ and the Gunners want to close the signing this week.

Wednesday’s edition of AS once again relays the midfielder is close to joining the Europa League runners-up.

The 22-year-old was initially close to joining Tottenham Hotspur, but Unai Emery convinced him more than Mauricio Pochettino.

Ceballos believes he will have more playing time under the former Sevilla manager, which is why he has opened the door to leave Los Blancos for Arsenal. 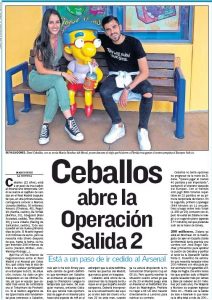 It is claimed that Tuesday was an ‘intense day of negotiations’ between Arsenal and the La Liga side for the Euro U21 winner.

Real Madrid will face Arsenal in a pre-season friendly on July 23rd, but Ceballos prefers to travel to London and sign his contract with Emery’s side rather than flying to the United States.

He wants to travel to the English capital and ‘sign his contract’.