Wesley Moraes came off the bench in Aston Villa’s 2-0 victory over Newcastle United in August.

The striker is yet to start a fixture for Dean Smith’s side since he suffered a serious injury against Burnley in January 2020.

He was made aware the opportunities to have regular minutes at Villa would be limited this season, which convinced the 24-year-old to look for other options in the summer.

Towards the end of the window, the Brazilian returned to Club Brugge on a season-long loan deal. The Villa owned player has now revealed the conversation he had with Smith which helped in his temporary transfer.

“I didn’t think it would be now, but I always had it in my head that I would one day return to Club. The injury hastened that return. I have to play. That’s why I’m here,” he told Het Nieuwsblad.

“I was also able to play at Aston Villa, but the highest achievable was substitutions of a few minutes. I wanted to be able to start games again to grow to my best level. I am not the type of striker who can make a difference as a substitute. I told the coach I had to play more and wanted to leave. He said he understood.

“I have always kept in touch with Dévy [Rigaux, the recruitment manager of Club Brugge] Sometime at the end of July I told him I wanted to play more and he said that this could be interesting.”

The Villa owned player also detailed how Club Brugge convinced him to return to the club in the summer.

“Club Brugge reported a week and a half before the end of the transfer period. I don’t know if there were any other options. I heard something about German clubs. Maybe they talked to my agent, but they didn’t talk to me,” Wesley explained.

“When Club Brugge wanted me back, my decision was made. I know the club, I know the players, I know everyone. I spoke with my agent, with Dévy and Vincent [Mannaert]. Dévy said the fans and the chairman wanted me back. I said, ‘if that’s true, I want to go back’.”

The South American’s contract at Villa Park will run down in 2024, but he isn’t sure where his long-term future will be. 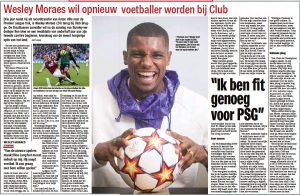 “My first goal is to play. I haven’t started a game since January 1st 2020. After this year, I am under contract at Aston Villa for two more years,” the striker stressed.