Home Europe “Will have a hard time/Too big for his boots” – Di Canio...
SHARE

The Foxes take on Napoli in the beginning of their Europa League campaign on Thursday, with Luciano Spalletti’s side visiting the Kingpower Stadium.

Brendan Rodgers side have had a solid start to the season so far, although one glaring problem has been their defence.

The loss of Wesley Fofana has hit Leicester hard, leaving a large hole in a defence that impressed last season.

So far, his replacements have struggled to fill the void, with Vestergaard still settling after a summer move from Southampton and Soyuncu in a wretched run of form.

The Turkish international had a poor campaign with his country at the Euros and has carried that into the start of this season with several poor performances so far. 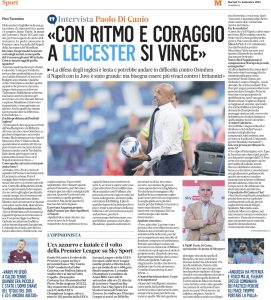 It’s something that has already cost Leicester at times this season, and Di Canio is predicting more trouble when they face the Italians this week.

“Vestergaard, who has just arrived from Southampton, is a tall, wiry guy, but with someone like Osimhen, if he plays, he will have a tough time,” he told Il Mattino.

“But the same if there will be the false nine. Then there’s the Turkish player who, since he was supposed to go to City but then stayed, has become a bit too big for his boots.

“Soyuncu, even with Turkey, has caused damage; he plays almost like he’s got a nose for trouble.”