Arsenal are in the market searching for a new right-back to replace Héctor Bellerín, who is reportedly set to leave the north London at the end of this season.

Radio Castellón reported on Wednesday that the Gunners plan to replace Bellerín with Emerson Royal, who is co-owned by Real Betis and Barcelona.

Emerson has been with Los Verdiblancos since the start of the last season and will move to the Camp Nou in the summer, if the Catalan club pay €3m to Real Betis.

That’s what Mundo Deportivo journalist Xavier Bosch claims, and adds the Brazilian has a lot of suitors. Mikel Arteta’s side get a mention as they are one the interested parties along with AC Milan, Paris Saint-Germain, Villarreal and Bayern Munich.

Barcelona are struggling financially and could sell the 22-year-old to raise funds in the upcoming window. However, they are currently struggling on the right side of defence.

Sergiño Dest and Sergio Roberto are the two players used in the right-back position. The former Ajax man has struggled with poor form this campaign, while Roberto has suffered multiple injuries.

Bosch warns Emerson, who knows the league very well, has ‘quality’ and is ‘hungry’ to represent Barcelona. 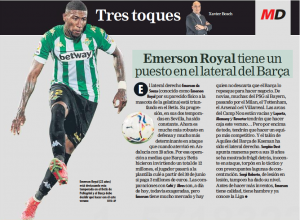 Barca will have to ‘make money’ through player sales, and considering the current right-back options, the position has become an ‘Achilles heel’ for Barca.

Time should tell whether Barca will look to retain Emerson or will they sell him to Arsenal or other suitors in the summer.