Other than seeing André Frank Zambo Anguissa sent on loan to Napoli, Fulham enjoyed a rather fruitful transfer deadline day, managing to bring in both Nathaniel Chalobah and Domingos Quina from Watford on a permanent deal and a loan respectively.

Their incomings list, however, could have seen one extra name had he accepted the move, according to Corriere della Sera, and that could have been Davide Santon.

Currently at AS Roma, the full-back knows English football well from his time at Newcastle United, but a return to these shores wasn’t in his plans.

The Italian newspaper explain the club ‘tried in the last minutes of the window to find a solution in England’, but the player ‘refused Fulham and all the other destinations in Italy’. 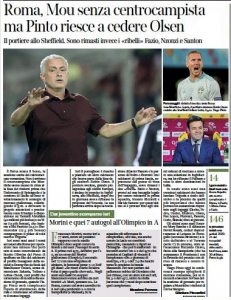 Whether there was a desperate need for him at Craven Cottage is a completely different discussion altogether, but the option was there.

He just chose not to take it.

‘Everything possible is being done’ – FA ‘moving heaven and earth’...