Saido Berahino struggled in his last few years in England and left Stoke City and completed a switch to Belgian side Zulte Waregem in the summer.

The 26-year-old came up through the ranks of West Bromwich Albion’s youth setup and enjoyed a good spell between 2013 and 2015.

During the 2014/15 season, the forward impressed by scoring 20 goals across all competitions and his performances for the Baggies drew attention from Tottenham Hotspur.

Spurs were keen on acquiring the player’s services in the summer of 2015, but West Brom decided against parting ways with the player. Since then the attacker’s performances dropped and he never managed to shine for either for the Baggies or his next club, Stoke.

Berhaino has given a lengthy interview to Belgian newspaper Het Nieuwsblad and they asked if his failed move to Tottenham was the reason for his decline.

He said, “That played a lot. That’s when the misery started. As a player you want to go to the top and that was Tottenham. But the owner of West Brom wanted to sell the club.

“And I – two times the team’s top scorer, young international, twice The Young Player of The Year – was the most valuable asset of West Brom. That’s why he didn’t let me go. If he sold me, he could not sell the club for so much money.

“I didn’t understand that and couldn’t handle it. It was a selfish decision. I took it personally. I can now give lay it to rest, but that took me years. I blamed others. It killed me.” 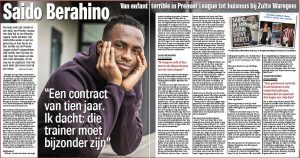