Yesterday, we covered claims from Spain and France on Keylor Navas and David de Gea and explained why it didn’t make a great deal of sense.

It was explained the Costa Rica international could move to Manchester United if their goalkeeper joins PSG. The French club were keen on a free transfer, which would only happen if United haven’t used their option to extend the goalkeeper’s contract.

Given the club have already announced they’d use the extension clause, and not doing so would be ridiculous, the story didn’t have much in it.

That hasn’t stopped AS from linking Navas to Ole Gunnar Solskjaer’s side and De Gea to the Ligue 1 winners.

AS claims the Spain international is of ‘great interest’ to PSG and this, coupled with a lack of Champions League football at Old Trafford, has made it difficult for Manchester United to extend De Gea’s contract beyond 2020.

Jorge Mendes, who is tasked with finding a new club for Navas, has been ‘spent months working on a manoeuvre’ that could see De Gea move to Paris and Los Blancos keeper make a switch to Old Trafford. 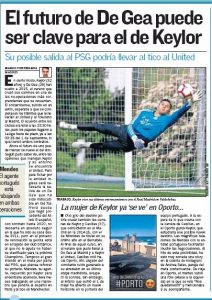 The super agent also represents De Gea and the report explains Mendes is ‘working on both operations’.

Navas’ move to United will only be possible if De Gea leaves Solskjaer’s side. If not, the South American must find another club.