In the summer of 2021, Manchester City let Pedro Porro join Sporting on a two-year loan deal with an option to buy.

Operating as a right wing-back, he has scored four goals and registered seven assists in all competitions. His performances have convinced Sporting to make his stay permanent.

Saturday’s edition of Jornal de Notícias explains the Manchester City owned player has ‘everything agreed’ to be a ‘permanent reinforcement’ of the Primeira Liga side.

It’s even claimed the Lisbon club have informed the Premier League winners about their desire to retain the 22-year-old. To do that, they will pay €8.5m to the Citizens.

This means the Spaniard ‘ends his connection with Manchester City’ and seals a permanent switch to Lisbon. He will sign a new contract with them until 2025 and that will include a €45m release clause. 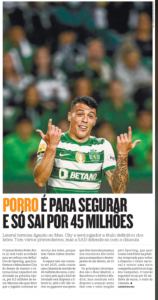 Although Sporting will make Porro’s stay permanent, there are several other clubs interested in him. Real Madrid, Barcelona and Atlético Madrid are the ‘main interested parties’, but none of them are ready to pay the clause.

On May 5th, Record reported that Manchester City have inserted a €20m buyback clause. This was further backed up by A Bola a day later.