Mbwana Ally Samatta has been one of the standout performers in Genk’s title winning campaign this season.

The Tanzania international has scored 32 goals and registered six assists across all competitions.

Saturday’s edition of Belgian newspaper Het Belang van Limburg claims the striker now dreams of playing in the Premier League and he ‘can count on interest’ from Cardiff City.

Unfortunately for the footballer, the Bluebirds were one of the three clubs relegated from the top flight club competition in England and will play in the Championship next campaign.

The 26-year-old’s contract with his current employer will run down in 2021 and HBVL explains the Jupiler Pro League side have an agreement to allow the player leave in the summer transfer window, if they receive the ‘right bid’. 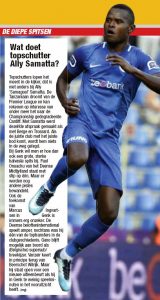 It’s not stated as to what will be the right offer for Samatta and if Cardiff are interested in meeting Genk’s demand to acquire the frontman’s services.

HBVL only mentions about Cardiff’s interest and apart from that, no additional details are reported.