Striker Cucho Hernández ‘must return’ to Watford this summer after their promotion to the Premier League.

That’s according to AS, who say the striker ‘already knows’ he will be forced to return to Vicarage Road after his loan spell at Getafe.

The Colombian striker was sent on loan to Spain for a third straight year back in August following previous spells with Mallorca and Huesca.

He’s had something of a difficult time this year, with just two goals and three assists in 23 games in La Liga this season.

Nonetheless, Getafe were ‘satisfied’ with the deal and could have looked to extend it, but one of the ‘conditions’ set by Watford in the initial loan deal was that the 22-year-old would return if they were promoted.

That is something they managed last season, and so Cucho ‘will play in England’ next season despite Getafe’s ‘continued interest’ in him.

Whether he will remain with Xisco and co isn’t clear as yet, but if he doesn’t, Getafe will not be the only club interested.

According to COPE, Granada are also eyeing a move, with Hernández on their list of potential strikers alongside Sevilla’s Munir. 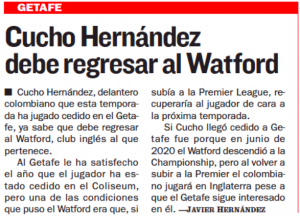 Their interest is likely to depend on the future of manager Diego Martínez, who has been heavily linked with a move to Valencia this summer.

His departure could change the club’s plans, but if they were to make a move, it would see them re-open negotiations with Watford a year after working out a deal for Luis Suarez.

They have a relationship to take advantage of then, should Watford elect to sell, although for now, Hernández will be returning to Vicarage Road.