Corentin Tolisso is in his final year of contract at Bayern Munich and his situation has drawn the attention of other European clubs, with Tottenham Hotspur, Juventus, Inter Milan and AS Roma linked

At the end of last month, Calciomercato reported Spurs chief Fabio Paratici has been a fan of the midfielder for a while, and is trying to bring him to the north London club.

For the past few years, the 27-year-old has struggled with multiple injuries, a situation which has extended into this season as a calf problem forced him to spend time away from the pitch in September.

With a current deal expiring in 2022, Kicker explain the France international’s ‘employment at Bayern is limited until the end of the season’. 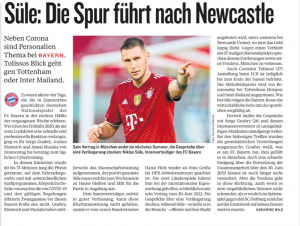 In search of a new destination, the magazine states the ex-Lyon man is being ‘advertised at Tottenham Hotspur and Inter Milan’ by his consultants.

So, in other words, his agents are pushing him towards Spurs, likely trying to tempt the club into making an effort.

Paratici is an admirer of Tolisso, but it’s not clear whether Antonio Conte is in favour of the player’s arrival at Tottenham, especially considering his poor injury record.