Chelsea are said to be keen to take Ousmane Dembélé on a free transfer this summer.

The winger is out of contract at Barcelona on June 30th and has not accepted their offer to sign a new deal so far.

At the start of this week, we covered claims made in Spain that Chelsea have a ‘strong interest’ in the 25-year-old.

The La Liga side are waiting to find out whether the ex-Borussia Dortmund man will sign a new deal with them or decide to make a move elsewhere as a free agent.

Sport now state Barca will wait until the end of the month and only then will look to find a replacement for him.

Although the Catalan club have given up on the France international, they have a slim hope of keeping him since he has not agreed to join another club. However, this saga has already left Xavi Hernández’s side tired.

The decision to wait could benefit Barca financially because it would be a good economic operation for them given they don’t have to invest on his replacement. 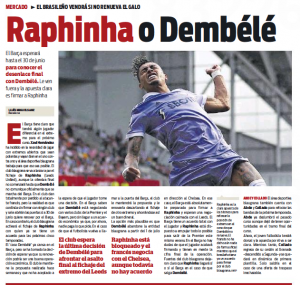 he is negotiating with several Premier League sides and Bayern Munich. However, none of these clubs are ready to meet his demands yet.

Sport state the ‘most plausible option’ for the attacker is to leave the Blaugrana for Chelsea this summer.

Dembélé is negotiating with Thomas Tuchel’s side, but has not found an agreement with the Blues so far.

Liverpool player ‘unhappy with current situation’ – Surprise as ‘departure is...