On Friday, Sport reported Ousmane Dembélé’s agent is handling offers from Chelsea and Paris Saint-Germain, while waiting for a fresh renewal proposal from Barcelona.

The winger’s contract expires on June 30th and it’s not clear whether he will sign a new deal at the Camp Nou or join another club on a free transfer this summer.

Chelsea have received encouragement in their chase for the 25-year-old, as PSG have withdrawn from the race.

That’s according to Sport, who state negotiations between the player and the Ligue 1 side have ‘frozen’ due to Leonardo’s impending exit. Luis Campos is set to replace him at PSG and he prefers to invest on a midfielder over signing Dembélé. 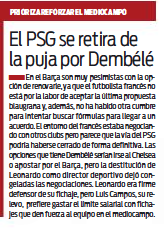 Xavi Hernández’s side are ‘very pessimistic’ about an extension since the player isn’t content with the terms offered in the latest renewal offer.

Reports in the British press stated Chelsea could be the France international’s next possible destination. This is relayed by Mundo Deportivo, and they then provide their own information on this case.

Mundo explains it is ‘true’ that there is ‘strong interest’ from the Blues in the wideman, who is a target for Thomas Tuchel this summer.

At the moment, nothing has been ruled out regarding the attacker’s future, even staying at the Camp Nou.

Xavi’s side, however, have been waiting for a definitive answer from the player for months.