Malang Sarr signed for Chelsea in the summer transfer window.

The Blues secured the 22-year-old in August, signing him in a five deal after his contract with OGC Nice expired.

Given it was unlikely the youngster would be able to get a reasonable number of games under Frank Lampard, then manager of the Premier League club, a loan was the obvious option.

Chelsea agreed to send Sarr to FC Porto for the current season, on a straight loan without a buying option for the Portuguese club.

He’s been in and out of the team for various reasons, yet has managed to build 19 appearances for Porto in the current campaign so far. This included 58 minutes midweek as the club knocked Juventus out of the Champions League, his sixth appearance in the competition during the loan.

Speaking to L’Equipe, the defender was asked about signing for Chelsea and his loan to Porto, and he made it clear this season is part of a process so he can then switch back to the Blues and be on a better footing to succeed. 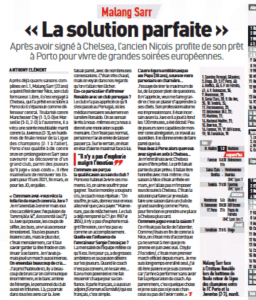 The French newspaper quote the central defender as saying: “I was training with Chelsea before I got loaned. The loan was part of the plan. I had to be honest with myself, my season ended in March and I wasn’t going to be successful right away with Chelsea.

“It was the perfect solution because I wanted to do a season at a top club like Porto, to be good and then later take a place at Chelsea.”