Loaned to Hellas Verona for the season with an option to buy, Manchester City’s Ivan Ilic is catching the eye of many teams.

Gazzetta dello Sport look at the situation on Tuesday, and make it clear that the Serie A side ‘will invest €10m for the Serbian midfielder’, thus making the temporary deal a permanent one.

That being said, they still aren’t sure if the player will be with them for the 2021-22 season, as Manchester City have the option to buy him back for double that i.e. €20m.

This is why the Italian newspaper explain it’s all ‘pending the decision of Guardiola’, who could simply ask his club to repatriate Ilic for his squad in order to ease him into his plans going forward. 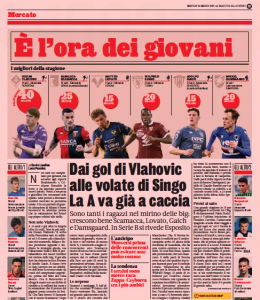 However, even if the Spanish manager decides against it and is happy to see the 20-year-old leave for good, there is ‘space for suitors, who are not lacking’.

So, it’s clear that Verona will purchase Ilic from Manchester City in the coming months, but they are also likely to lose him soon after, as his performances have been more than adequate under Ivan Juric.

Whether it’s via a €20m return to the Etihad remains to be seen.