Home Europe ‘The player is clear’ – Leeds United will have to offer €3m,...
SHARE

Lucas Vazquez continues to be linked with multiple Premier League clubs, with Leeds United repeatedly among the group.

The 28-year-old’s contract at Real Madrid expires at the end of the current season and there’s been disagreement when trying to find a renewal.

Vazquez has played 31 matches for the Spanish club so far this season and is someone Zinedine Zidane looks to for reliability. He’s flexible in his role and has spent this season mainly playing right wing or right back.

Given how much he’s used it’s a surprise to the Spanish media that Vazquez is still one of the lowest paid players in Real Madrid’s squad. That was supposed to be changed with a renewal, but the low offer has allowed other clubs, including Leeds United, to consider the free transfer. 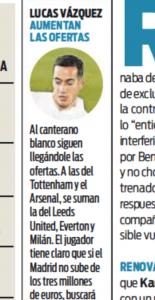 Tuesday’s edition of Sport reports that Vazquez is looking for €3m a year, a figure which will be after tax. ‘The player is clear’ with his demands and if Madrid don’t offer that amount then he’ll look elsewhere.

Previous reports stated the Spaniard would like a club who can provide Champions League football, which would be a problem for Leeds United to overcome.