With the January transfer market just around the corner and Newcastle United picking up their first win of the season, we could finally see some players turning their attention to St James’ Park.

After all, it’s clear that Eddie Howe has given the squad a kick up the backside, and he will want to use the momentum to secure some more vital points in the race to avoid relegation, at which point the Magpies will be able to comfortably spend their money with fewer worries.

One area the club could use some help at is up front, and Patrik Schick could be a candidate, although his agent, Pavel Paska, made it clear when speaking to MF DNES that everyone should temper their expectation when it comes to the January window, and that his client would likely stay at Leverkusen for the rest of the season.

He said: “Don’t expect any bombastic transfers. It will more be loans with options, exchanges. Clubs are careful. Perhaps only the English will go for it, for example Newcastle with a new rich owner, but for everyone, the demands on scouting have risen tremendously, and every transfer is perfectly X-rayed”.

Paska explained that clubs are more reluctant to make mistakes these days, mostly because of the cost of players, and he wants to ensure his client doesn’t ‘jeopardise the good development’ he’s undergone in Germany. 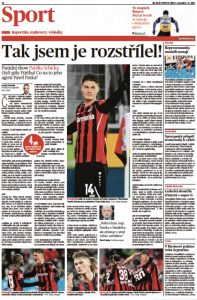 With 12 goals in the Bundesliga, bigger clubs are looking at him, and ‘if it continues like this and seats in big clubs become vacant, anything can happen’.

For now, though, Schick ‘likes Leverkusen’ and ‘doesn’t think about change at all’.

There’s little doubt that if Newcastle United came knocking, he would get the starting spot in the line up, but that might have to wait until the summer.