Belgium boss Roberto Martinez has confirmed that Leeds United defender Pascal Struijk is a player he is interested in.

Reports over the last week have indicated that Struijk is set to switch allegiance and feature for Belgium on the international stage, not the Netherlands.

Initially, it was claimed that Martinez had spoken to the Leeds centre back on the phone about the matter, but since then it has been revealed that the player has started proceedings on the matter.

It was claimed yesterday that he actually started the process of getting a Belgian passport at the end of last year and was exploring his options.

While this was in no way a statement that he would be playing for Belgium in the future, it was a clear sign that the option was very much there for the 21-year-old.

Martinez has now confirmed as much, admitting to phoning the Leeds man but insisting there is nothing more than that at present.

“I saw him at work in a Leeds United game against Derby County, and I was immediately pleasantly surprised,” he told Het Laatste Nieuws.

“Especially because he played as a midfielder. He has a good presence, he’s left-footed, but I was surprised to see him in that role in midfield. 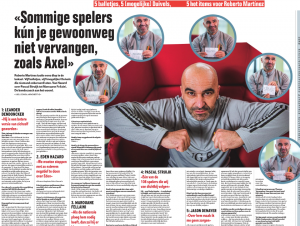 “From then on, we started following him because he has a very interesting profile. We talked once, but that’s it.

“But he is one of the players I have followed very closely in the last ten months because he can be part of our future. Pascal is one of the 108 players that we follow closely.”