That’s according to Super Deporte, who say the Leeds boss has ‘has already made a first approach’ to the Spanish coach.

Martinez has been linked with Leeds for the last few months, with several reports in Spain indicating that he is Orta’s preferred replacement for Bielsa.

The Argentine coach is not under any pressure at Leeds at this moment in time, despite a poor start to the season and them struggling in their second year back in the Premier League.

Bielsa’s contract expires at the end of the season, though, and with him preferring to wait until the summer to decide his future, Leeds need to have a plan in place should he depart.

Martinez is one of them, and earlier today, we covered a report from La Razon that stated he had been ‘endorsed’ by Orta.

Super Deporte pick up that thread and explain Martinez is currently in England, studying English football ahead of a move to the country.

They say ‘everything suggests’ that he will be Bielsa’s replacement at Leeds next season, and Orta ‘has already made a first approach’ with him over the role. 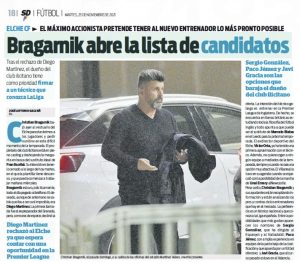 Martinez, though, does not want to take charge of a team in the middle of the season, something which was made clear when he was named as an option for Villarreal if Unai Emery had moved to Newcastle.

There is no indication, then, that Leeds are about to sack Bielsa and replace him, more that they are just planning for life without him.

The feeling is that Martinez would arrive in the summer should the Argentine not extend his contract, which is always a distinct possibility.

The fact Martinez has already moved to England to learn the game, and presumably the language, hints he’s had a clear message from Orta that something might be happening in the summer.

That remains to be seen, of course, but expect to see his name and Leeds more closely associated in the coming months.