Home Premier League Chelsea “There is one thing you must never do” – Club icon takes...
SHARE

Finally returning to Chelsea after a long drawn out affair between the Blues and Inter, Romelu Lukaku has started strongly for at Stamford Bridge.

Scoring the winner in their first Champions League game of the season against Zenit, the Belgian already has four goals to his name since his £100m+ transfer.

While his transfer was welcomed by Chelsea fans, it was anything but by their Inter counterparts, who felt betrayed by the goalscorer, who had promised he would stay, regardless of whether Antonio Conte was still at the helm or not.

Breaking said promise when he made it clear he wanted to redeem himself at Stamford Bridge after a very disappointing first spell there, Lukaku’s actions didn’t sit well with one of the club’s icons, Diego Milito. 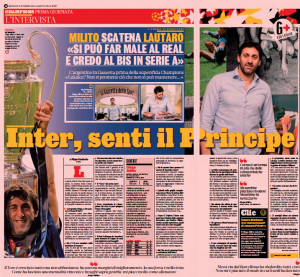 Speaking to Gazzetta dello Sport, the former striker was asked directly about the big summer transfer, to which he replied: “There is one thing you must never do, promise something you cannot keep. It may be that a player like him, who has given so much, chooses to go elsewhere, but the fans are disappointed precisely because of those statements”.

We’re not sure Lukaku cares all that much, but it’s fair to say he might not be that welcome in Milan in the foreseeable future.