Turkish newspaper Posta claim Galatasaray are in transfer talks with Crystal Palace midfielder Cheikhou Kouyate and that the Senegalese international is moving closer to joining the Super Lig side.

After losing Mario Lemina and Jean Michael Seri, Gala are in the market to replace them and they’ve also been linked with moves for the likes of Bournemouth’s Jefferson Lerma and Fulham’s Stefan Johansen.

It’s reported a one-year loan bid has been submitted to Crystal Palace for the 30 year old, and Posta claim talks are going well between the two sides. Kouyate is said to be keen on a move to the Turk Telekom Stadium. 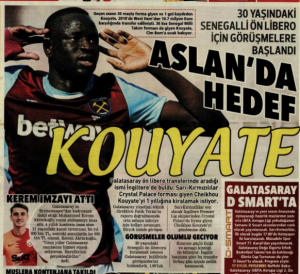 Gala will make a decision regarding other targets in the coming week and the signing of Kouyate could be confirmed very soon.

The Turkish side are looking to bounce back next season after missing out on Europe.

Kouyate made 36 appearances in all competitions for Roy Hodgson’s side last season and scored one goal. Kouyate’s contract at Selhurst Park will expire at the end of June 2022.