Liverpool have been in contact for the signing of Nuno Mendes, according to Portuguese newspaper Record.

The Reds contacted Miguel Pinho, the 18 year old’s representative, a few weeks ago. Jurgen Klopp’s side made the representative aware they would be willing to move for the young left-back, but not at an amount anywhere near his €45m release clause.

Pinho then informed Sporting of the Liverpool approach, and the Lisbon club responded by pointing to the clause amount and using that as a reference.

Reading between the lines, it would appear the Premier League champions were quickly put off by the response, and instead moved to sign Kostas Tsimikas.

Real Madrid have also been credited with an interest, but, just like Liverpool, they’d have no intention of going anywhere near the €45m amount.

Depending on how Tsimikas does in his first season at Anfield, and Nuno Mendes’ progress with Sporting, this could be one to look at for future transfer windows. 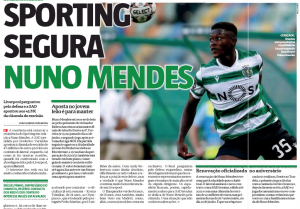 Should he progress as hoped for, there’s every chance Sporting will look for a renewal and a bigger clause.

Pinho knows from representing Bruno Fernandes just how difficult the Portuguese club can be when they want to keep a player on their books.