Nottingham Forest want to keep Filip Krovinovic in their squad for next season, according to claims from the Portuguese media today.

Newspaper A Bola is the one reporting the Championship side would like to have the midfielder on a new loan deal from Benfica.

Krovinovic joined Nottingham Forest back in January, when he had a spell at West Brom cut short, and his 19 appearances for Chris Hughton’s side were apparently enough for the club to fight to keep him.

A Bola writes that the player’s future ‘seems distant’ from Benfica, and that ‘he could continue’ in England, but that will depend on other factors. 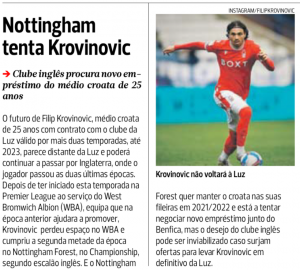 The Lisbon side seem more interested in letting Krovinovic go on a permanent deal. So for Nottingham Forest to get another loan, they’ll need to wait and see if any other club will knock on the Eagles’ door to buy the player.

A Bola doesn’t say how much Benfica are demanding in case of a sale. The midfielder has two more years of contract with the club, and doesn’t seem to be in their plans for the future.