Aster Vranckx signed his first professional contract at KV Mechelen in December 2018 and it took him seven more months to make his debut for their first team.

The 17-year-old has made 10 appearances in all competitions this season and has managed a goal and two assists in the process.

His performances have caught the attention of Manchester City, Feyenoord, AC Milan, Bayern Munich and other clubs.

Het Nieuwsblad states the teenager’s current valuation has increased to €4m. The Belgian newspaper also had an opportunity to interview Vranckx and asked him about the claims of interest from Pep Guardiola’s side and other clubs.

Responding to that, he said: “I’m not easily impressed. It’s just nice to hear. Of course, you can never exclude anything in football, but I will play for KV Mechelen next season.”

Vranckx can operate as a central or defensive midfielder and signed an extension with the Jupiler Pro League side last August. His current deal with KV Mechelen lasts until 2022.

The Belgium U16 international has revealed that KV Mechelen have chalked out a plan for his development, which is why it’s best for him to continue with his current employer rather than making a move elsewhere.

“Here they set out a good career plan for me. In recent years, Belgian top clubs such as 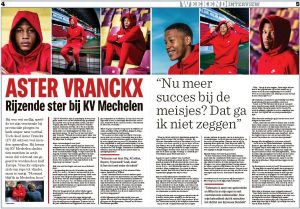 Club Brugge, Standard [Liège] and Anderlecht have sometimes asked about me, but here I have the most chance of playing,” Vranckx stressed.

Given his contract situation, KV Mechelen will likely want to get a renewal, to protect them against the interest of Manchester City and others.