Reading one of the many Bruno Fernandes stories today, we’ve stumbled upon some strange claims about Manchester City’s chase for a Brazilian youngster.

Newspaper Jornal de Notícias claimed that in order to replace Fernandes, Sporting would like to sign Antony on loan from the Premier League side.

This is not a new rumour. Last month, it’s been reported that Manchester City would like to sign the São Paulo attacker, and due to a partnership with Sporting, the Lions could get him on a season-long spell.

The strange thing today is that Jornal de Notícias reports it as if Manchester City had already signed Antony, and in reality it doesn’t even look close to happening. 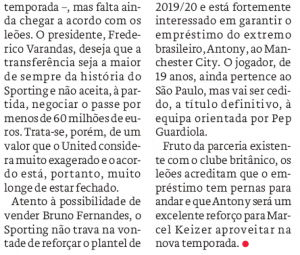 In their own words, they say: ‘The player, 19, still belongs to São Paulo, but will be assigned, permanently, to the team coached by Pep Guardiola.’

We’ve checked the latest reports in Brazil and there’s nothing about Manchester City’s chase for the player. In fact, those rumours started in Portugal, and were only covered by the Brazilian media afterwards.

We’ll be keeping an eye on this story, but it looks like Jornal de Notícias are mistaken, unless they know something no one else does.