The scout will be watching AC Milan take on Sampdoria, in a match which is being widely covered because it’s Zlatan Ibrahimovic’s first since his return to the San Siro.

Newcastle aren’t there for the Zlatan party, though, and have another Milan player on their mind, according to the claims.

It’s stated the club will be watching Hakan Çalhanoğlu as they finalise their targets for the January window, and look at options for the summer market too.

Çalhanoğlu is a 25 year old attacking midfielder who plays mainly on the left side. He’s started the match for Milan today, which has kicked off early because it’s a public holiday in Italy for Epiphany. 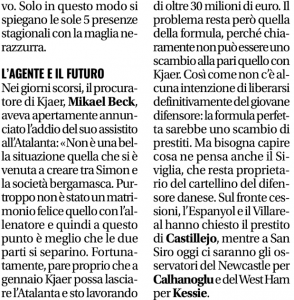 So far this season he’s played 16 Serie A matches and scored two goals, adding an assist along the way.

Çalhanoğlu’s contract with Milan runs until June 2021, so now is the time to start thinking about a renewal or a sale.