Portuguese giants Benfica currently have two good options for left-back, and that seems to be one of the issues to focus on during the summer transfer window.

As written by A Bola today, the Eagles would like to keep Alex Grimaldo in their squad. For that to happen, they may need to sell Nuno Tavares, who’s currently the back-up alternative for him.

The newspaper takes claims from abroad to say there are several clubs who’re interested in the 21-year-old. Only in England, the likes of Newcastle United, Brighton and Southampton are all linked to him.

And the Premier League sides only represent part of the race, since Tavares was recently reported as a target of Inter Milan, Roma and Villarreal as well. 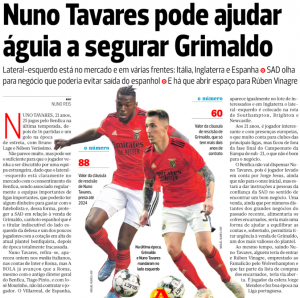 That’s good news for Benfica, because even though they aren’t getting rid of him, they do have people  working on the market to ‘find good business’ for his departure.

Tavares is currently protected by a release clause of €88m. That’s even bigger than Grimaldo’s, which is of only €60m, although that also shows  that the Eagles won’t get something close to that amount.

It isn’t clear how much Benfica would demand for Tavares in the summer, but it does look like a good opportunity for Newcastle United, or any interested clubs, to negotiate for his transfer.

The youngster made 25 appearances for the Eagles last season, and the fact he has experience playing European competitions is pointed out as something that could help him to get an interesting move.