Once a key player at West Ham United, Issa Diop has seen his time reduced under David Moyes this season.

The Frenchman has only started six games in the Premier League, all of which have come after the injury to Angelo Ogbonna, and while he has impressed since, the expected return of Kurt Zouma in the near future could force him back to the bench.

That’s why Newcastle United, according to L’Equipe on Friday, are looking into the centre-back as they look to bolster their defence in January.

It’s stated Diop, ‘like many other non English players’, entertains a ‘sinuous relationship’ with Moyes, which ‘hasn’t escaped the attention’ of various clubs, including the Magpies.

In fact, Newcastle have ‘recently launched an offensive’ for the former Toulouse star, and have ‘started discussion to determine the conditions of a possible transfer’. 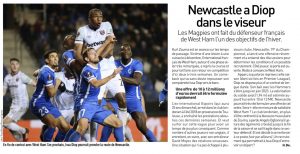 As for the player, ‘the door is open’, but there is still a need to ‘convince West Ham’.

Regarding Diop’s value, it’s estimated at €10-12m, and Newcastle ‘could very quickly make an offer’ of that amount for the 24-year-old.

Whether that’s enough for West Ham, however, remains to be seen, as the Hammers are currently struggling with a lack of depth in the heart of their defence until Zouma returns.

Should they buy someone, with various profiles being studied, then that could free up a Diop transfer to St James’ Park.