On Monday, RMC Sport explained Leicester City have made their first offer for Lille’s Boubakary Soumaré.

The Foxes have a firm interest, and along with Newcastle United they are ‘particularly’ keen on signing the midfielder.

That’s what L’Equipe are reporting today and they say the Magpies have a longstanding interest in the 22-year-old.

The Tyneside club were keen on signing the Frenchman in the winter 2020 market and even submitted a bid, which was reportedly turned down by the player.

L’Equipe now explain Soumaré has a market in England, where he is ‘particularly coveted’ by Brendan Rodgers’ side and Newcastle.

The latter’s previous failed attempts are once again highlighted, and the newspaper details the offers made by Steve Bruce’s side.

It’s claimed the Magpies have gone as far as tabling a bid of €40m in the past and they returned with a €32m offer in the winter market. Soumaré wanted to finish the season at 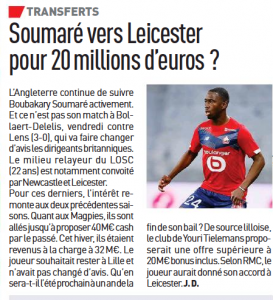 Lille, which is why a deal never materialised.

With a contract expiring in 2022, the player is expected to leave the Ligue 1 side in the summer, and Leicester are likely to be his next destination, despite the interest from Newcastle.

L’Equipe end their report by citing claims made by RMC Sport, which stated Soumaré has agreed to join Leicester.