Even though Everton continue being named as the favourite contenders for the signing of Matheus Nunes from Sporting, we continue to see Newcastle United getting a mention in those stories.

As covered by us earlier today, the Toffees are said to have his signing ‘reserved’, according to Record, as the Goodison Park side are in advanced talks for a deal worth up to €20m.

It turns out the outlet also has something to say regarding the Magpies, as they claim they’re in the race for the signing as well, but in a different situation.

Record says Newcastle ‘seem to have been left behind in this race’, recalling that back in January, they had only offered €13m for the midfielder. 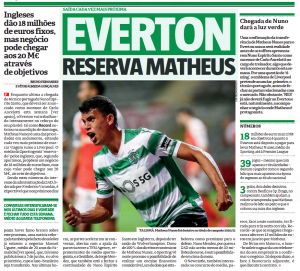 Newspaper O Jogo is another one reporting the race for Nunes, and since they don’t have that much information regarding Everton’s recent efforts, the competition seems more equal to them.

The outlet writes that the representatives from Toffees and Magpies had ‘informal’ talks for the signing, as both clubs believe the midfielder’s qualities would suit well in the Premier League.

O Jogo claims Sporting will demand €20m for the sale, so if we consider both reports, Everton seem close to that amount, and Newcastle need to move quickly in case they want a chance.