Newcastle United continue being pointed out as a potential destination for Sporting midfielder Matheus Nunes.

Today it’s newspaper Record who features a short paragraph on the 22-year-old’s situation, claiming he’s one of the players who could leave the Lions this summer.

They point out that Newcastle had already chased Nunes during the winter market, and ‘continue to be interested‘, now in a summer move.

It’s said Sporting will demand €20m for his sale, although they’re available for negotiating the price.

However, there are still other clubs who could join the race for his signing. 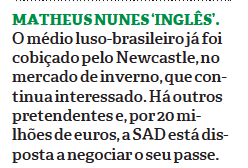 Newcastle’s interest in Nunes had already been recently highlighted by Record.

They claim that Magpies tried to sign him back in January, willing to pay €1m for a loan deal, plus €12m on a future purchase.

Now with a bigger budget for the summer, perhaps the Premier League side could finally negotiate a permanent move with Sporting, especially because the Lisbon side now look more open to a deal.